In June 2021, Albany Cities RISE program staff initiated an informal survey project intending to gauge COVID-19 impacts and community needs among landlords and tenants. Data collection continued throughout the summer and fall of 2021. The following report reflects the tenant portion of the survey.

"My former landlord assaulted...and harassed me...I’m in a much better situation now, and I’m endlessly thankful I was able to secure clean, safe, and affordable housing (which is rare in Albany)."

A small but substantial group of renters reported experiencing some form of harassment from their landlord, for various reasons. In total, at least 20% of respondents claimed to have been harassed by a landlord.

6.2% of participants stated that they had had an eviction case filed against them during the pandemic. This figure is lower than the total number of Albany renters facing eviction for any reason since March 1, 2020: more than 2,200 tenant households, or an estimated 4,642 residents (approximately 1 in 5 renters). It is also possible that some tenants did not realize there was an eviction case pending against them, or that they simply moved out upon receiving court papers. 1.3% of respondents were unsure of whether an eviction had been filed against them.

A considerable number of tenants (15.5%) reported having experienced some form of illegal eviction attempt by their landlord. Methods of unlawful eviction cited by participants included: harassment or making threats to coerce the tenant into moving out (n = 7), tampering with the tenant’s mail (n = 4), removing the tenant’s belongings from the unit (n = 3), changing the locks without providing the tenant with a key (n = 2), removing doors or locks (n =  2), and making false reports about the tenant to law enforcement (n = 2). At least two tenants had reportedly been physically assaulted by their landlords. 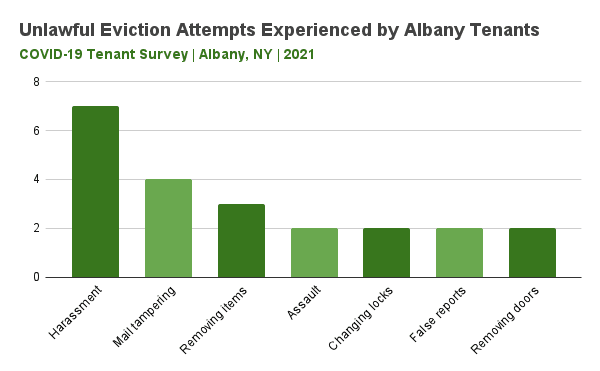 This data on illegal evictions was not surprising, given that more than 225 residents have been impacted by illegal eviction attempts (reported to the City of Albany) since 2020. Due to the statewide eviction moratorium, a steadily-increasing number of landlords have resorted to "self-help evictions" in order to regain possession of their units.

Just over half of tenants of tenants (54.5%) expressed having plans to stay at their current residence. 15.2% of tenants were unsure of their future housing plans, while an additional 4.8% reported they were facing eviction in the next few months. Three tenants (2.1%) were in the process of buying a home.

Nearly a quarter of tenants stated that they planned to move within the coming months (23.4%), further highlighting the housing instability that many Albany tenants are facing in light of the COVID-19 pandemic. Reasons cited by tenants for moving included lease non-renewal, sale of the property, landlord harassment, and code violations. Some residents expressed a desire to relocate but stated that they were having difficulties in finding a suitable residence due to apartment shortages and inflated housing costs. 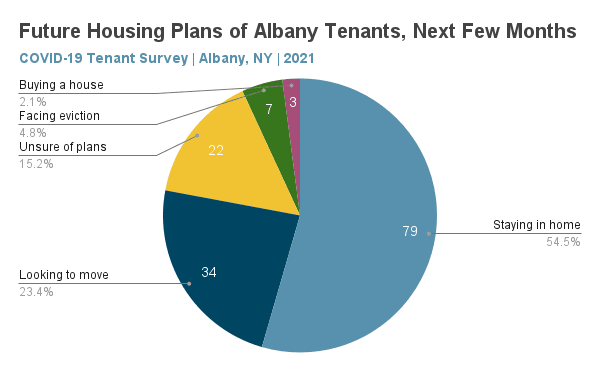 The impact of landlords deferring maintenance on their properties due to the pandemic has been felt strongly by Albany tenants. Participants in this survey cited a significant decrease in their landlord’s ability and/or willingness to maintain their units, with 35.4% of respondents stating that repairs were less likely to be taken care of now than they were prior to the pandemic. Maintenance issues had also contributed to deteriorating landlord-tenant relationships: some tenants became frustrated by the lack of repairs and decided to withhold rent.

"The basement ceiling has been falling in since the summer. Every time it rains, it’s like it’s raining inside. The black mold in the basement makes me concerned and [my landlord] refuses to respond to my inquires about when it will be fixed."

Across the board, tenants felt that their housing was less affordable to them presently than it had been prior to the pandemic, with 38.7% of respondents experiencing a decrease in housing affordability. While 80.8% of Albany renters surveyed felt that they could reliably afford their housing pre-COVID, this number dropped to 57.5% after the pandemic had taken hold.

"Rent has increased at rapid rates, yet the quality of housing has gone down, and landlords haven't been maintaining buildings...there is an unequal balance of power, knowledge, money, and resources [between landlords and tenants]."

Further research into average rents in Albany prior to and during the pandemic has shown a noticeable increase in housing costs. Widespread inflation, stagnant wages, and the end of pandemic unemployment benefits may also have contributed to renters’ perceptions of decreased housing affordability.

Only 19.3% of tenants reported owing rental arrears at the time of survey completion. Of the twenty-eight survey respondents who reported having rental arrears, only one expressed that they had no intentions of paying back the rent they owed to their landlords. In fact, 71.4% indicated they did intend to repay the arrears, while 39.3% stated that they were unsure of whether they would or could repay their landlords. One of the factors impacting residents’ ability to repay rental arrears could be the lack of available resources to assist landlords and tenants financially. The impacts of these programs on Albany residents will be discussed in the next section.

"My landlord has started to harass my boss about rent."

The figures mentioned above seem to be at odds with landlord perceptions that a large number of tenants are deliberately "taking advantage" of the New York State eviction moratorium. To the contrary, the majority of tenants who owe back rent have plans to pay back their arrears, while others hope to do so if they are able. The fact that so many tenants have fallen so far behind may be more of a reflection of the impact of the pandemic, and rising rents in Albany, than anything else. Indeed, Albany tenants are being evicted for ever-increasing amounts since 2020, when the COVID-19 pandemic first began to spread in our region. 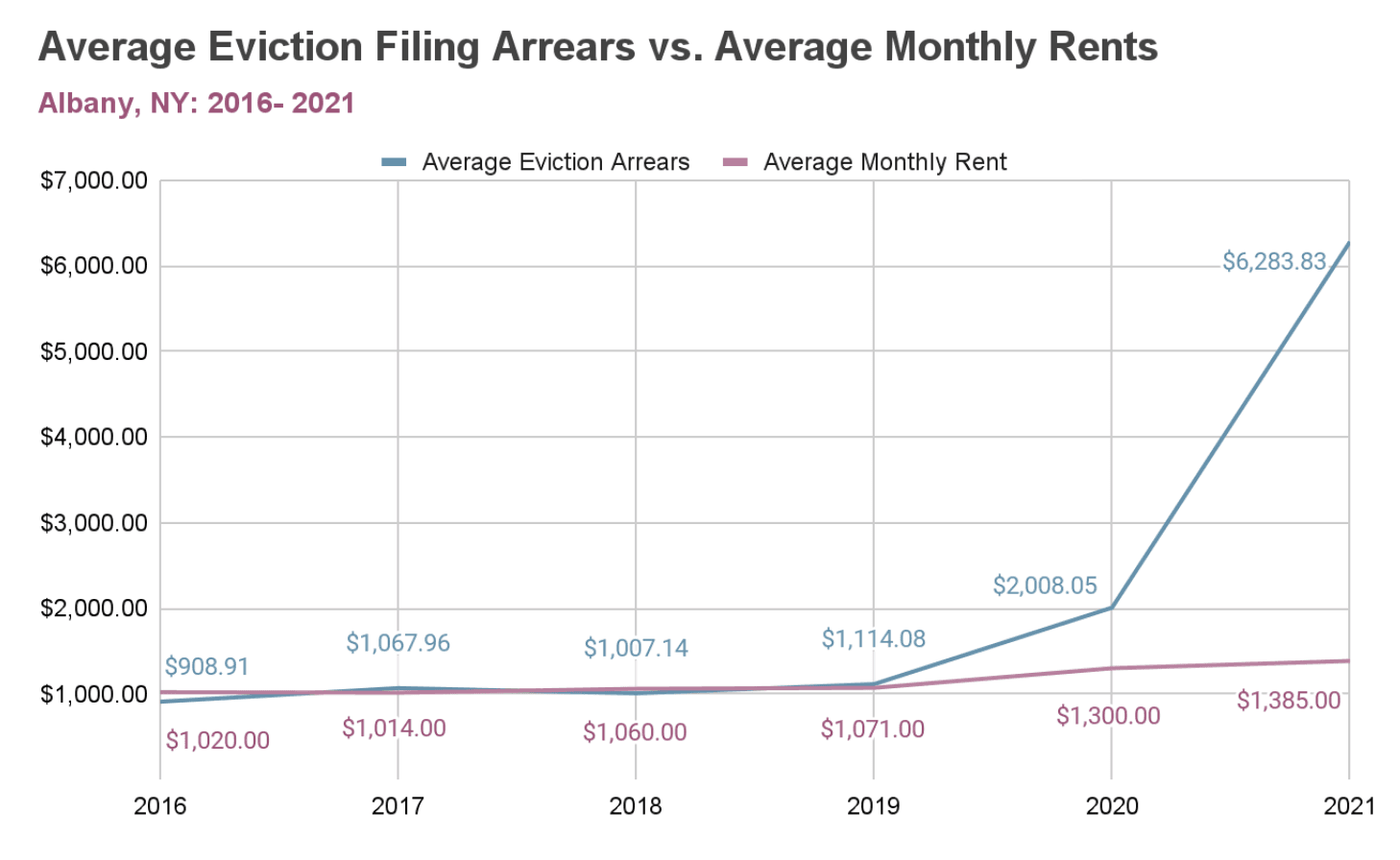 "Right now I am unemployed. If I don't get ERAP, I could lose my apartment."

It is possible that the actual percentage of Albany tenants who received assistance during the pandemic is higher than the figures reported above. This hypothesis is supported by program data (see Table 9)from the New York State Office of Temporary and Disability Assistance. The City of Albany’s COVID-19 Tenant Survey began accepting responses shortly after the New York State Emergency Rental Assistance Program was rolled out; subsequently, some tenants may not yet have applied at the time of survey completion. In addition, because there were significant delays in application processing times, it is also possible that some tenants who reported receiving no assistance would later be accepted for ERAP funding.

"My landlord [refuses] to submit his portion of the ERAP application...I already submitted mine and [have] been approved."

The results of this survey have demonstrated that Albany tenants are increasingly vulnerable when it comes to housing stability. As tenants and landlords alike grapple with the economic fallout of the pandemic, affordable housing slips further out of reach. Furthermore, COVID-19 has contributed to a deterioration of Albany's already-aging housing stock, making safe, quality units more scarce. The deterioration of landlord-tenant relationships has led to many property owners changing their rental practices, making it more difficult for renters to secure housing. In the coming weeks, the statewide eviction moratorium will expire, putting many more households at risk for eviction.