When a Snow Emergency is called all normal parking rules and regulations are temporarily suspended in the city.

You still CANNOT block hydrants, park in crosswalks, or park in a handicap spot without a handicap permit.

At the time the Emergency goes into effect you must move your car to the even side of the road for the first 24 hours.

Failure to do this may result in your car being ticketed and/or towed.

After the first 24 hours from the start of the Snow Emergency all vehicles are to be moved to the odd side of the street for the remaining 24 hours.

The City provides off-street parking in the following lots:

If your vehicle is towed during a snow emergency, you must call APD at 518-438-4000 to find out the location of the tow lot.

Our first priority when snowfall occurs is to maintain the drivability of emergency routes and main roads to ensure safe passage for emergency vehicles.

Once these priority routes have been cleared we begin the process of clearing snow from the rest of the city streets. Abiding by the parking rules established during the announcement of a snow emergency enables us to quickly clear and push-back snow from side streets.

You may notice some push-back of snow onto your driveway during this process and while it certainly isn't our objective we hope you understand that some push-back is inevitable as we have a responsibility to remove the snow from the street.

You will also see us removing snow from highly congested areas, this is primarily done overnight reducing the impact on traffic and increasing safety for our crews.

If your street hasn't been cleared yet the first thing that we ask for is patience and understanding; depending upon the severity and intensity of precipitation it may take a few days for us to clear and push-back every city street.

We ask residents, to the best of their ability, to avoid traveling during this process however if you see an area of concern please do not hesitate to call in and report it at (518) 434-CITY (2489.)

The City ordinance puts the responsibility of clearing sidewalks on property owners. All sidewalks adjacent to your property must be cleaned within 24 hours of the completion of the storm. If this is not done, the property will be cleaned and the owner will receive a fine and a bill for the service performed.

Handicap ramps adjacent to your property are included in the code and also must be cleared within 24 hours.

Dig out any fire hydrant on or adjacent to your property. It helps keep you and your neighborhood safe.

It is Illegal to place snow from any walkway, parking lot and/or driveway into any city street or highway.

Doing so can result in a fine.

The Department of General Services recommends periodically clearing the snow from sidewalks throughout the duration of the storm, as freshly fallen snow will be less strenuous to remove than snow that has settled and may be frozen.

Lawn damage is an unfortunate part of snow removal. If your lawn was damaged during snow removal please call the Department of General Services at (518) 434-2489. We will have the damage inspected and filled with soil and reseeded when the weather permits.

Additionally you may report your lawn on SeeClickFix to alert us that an inspection is needed.

What factors determine a snow emergency?

Snow Emergencies are primarily called based on street conditions after a snow event. Total accumulation is one factor, but the City also takes into account the amount of snow already on the street prior to the storm and whether another storm is forecasted in close proximity to a snow event. Another factor is the expected temperatures on the day of a storm and the days immediately following it. The City's primary concern is safe passage on streets, as well as parking needs in neighborhoods with little or no off-street parking.

Why does The City wait until after a snow storm to call an Emergency?

When it is snowing, our main priority is to keep the driving lanes open for safe passage for emergency vehicles and all other vehicular traffic. It would be ideal to order all cars off the streets during a storm, but that is not practical in a city with so many neighborhoods that depend on on-street parking.

Snow Emergencies are mainly called for the removal of snow and push back of trouble areas, which we are unable to perform during a storm. Snow removal requires the city to call in contractors with special equipment, which is costly, and also requires manpower from City crews that are needed to plow streets while it is still snowing.

Snow emergency parking lots need to be cleaned prior to the start of the Emergency and this cannot be done until it stops snowing.

How can I find out about Snow Emergencies?

We try to provide at least 12 hours notice prior to the calling of a Snow Emergency through various outlets including:

In addition, APD attempts to contact residents before towing cars by knocking on doors and making announcements.

Does trash and recycling still get picked up during Snow Emergencies?

If a snow emergency is called for your scheduled waste collection and recycling day DGS will collect your trash and recycling as usual. We do ask however if you are able to hold it until the next week pickup; its appreciated. 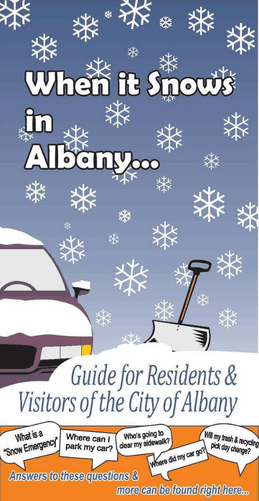 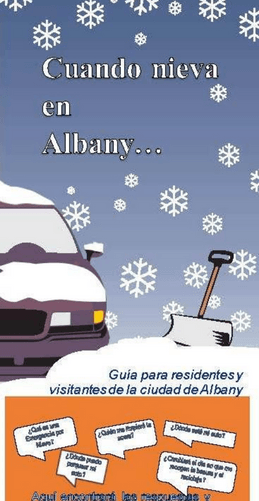