The Albany Fire Department is comprised of 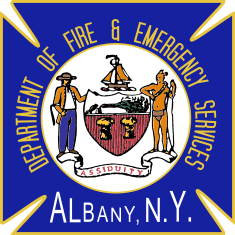 There are 8 Engine Companies in the City of Albany.  The primary function of the Engine Company is to suppress and extinguish fires by securing a water source (hydrant), locating the fire and using the appropriate hoses and equipment to extinguish the fire.  Engines carry a wide variety of different size hoses. 5 inch diameter hose is used to supply water from a hydrant to the engine or from one engine to another. 2 1/2 inch hose line is used to attack a large fire or a fire in a large open commercial structure. 1 3/4 inch hose line is used to attack a fire in most single-family buildings.

There are 4 Ladder companies in the City of Albany. Ladder Company Firefighters are deployed to fires and other emergencies that require the ability to access the upper floors or roof of a structure.  Ladder Companies have several functions and are equipped with either a truck-mounted ladder or a tower ladder.  Ladder companies also are responsible for forcible entry into secure buildings as well as searching for trapped victims. They ventilate fire buildings through the windows and through the roof to let heat and toxic smoke escape.

City of Albany Ladder Companies are equipped with a 100 foot aerial ladder device. In addition, each Ladder Company carries a full complement of ground ladders.

The Paramedic Companies are staffed by Firefighter/Paramedics, and have a primary duty to treat injured occupants or provide advanced life support when they are on emergency medical (EMS) calls.

At a fire scene, if not treating a patient, they will assist the Engine or Ladder Companies in their operations.

Paramedic Companies, Rescue 1, Rescue 2, Rescue 9 are also referred to as "Rescue" Companies. The primary function of the three Rescue Companies is the delivery of advanced life support during medical emergencies.

Each of these Paramedic Companies carries defibrillators,  life saving medications, and an assortment of medical supplies . This equipment is the same that is found in any well-stocked hospital emergency room. 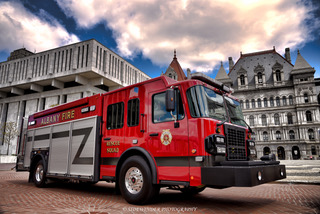 The Heavy Rescue responds to: 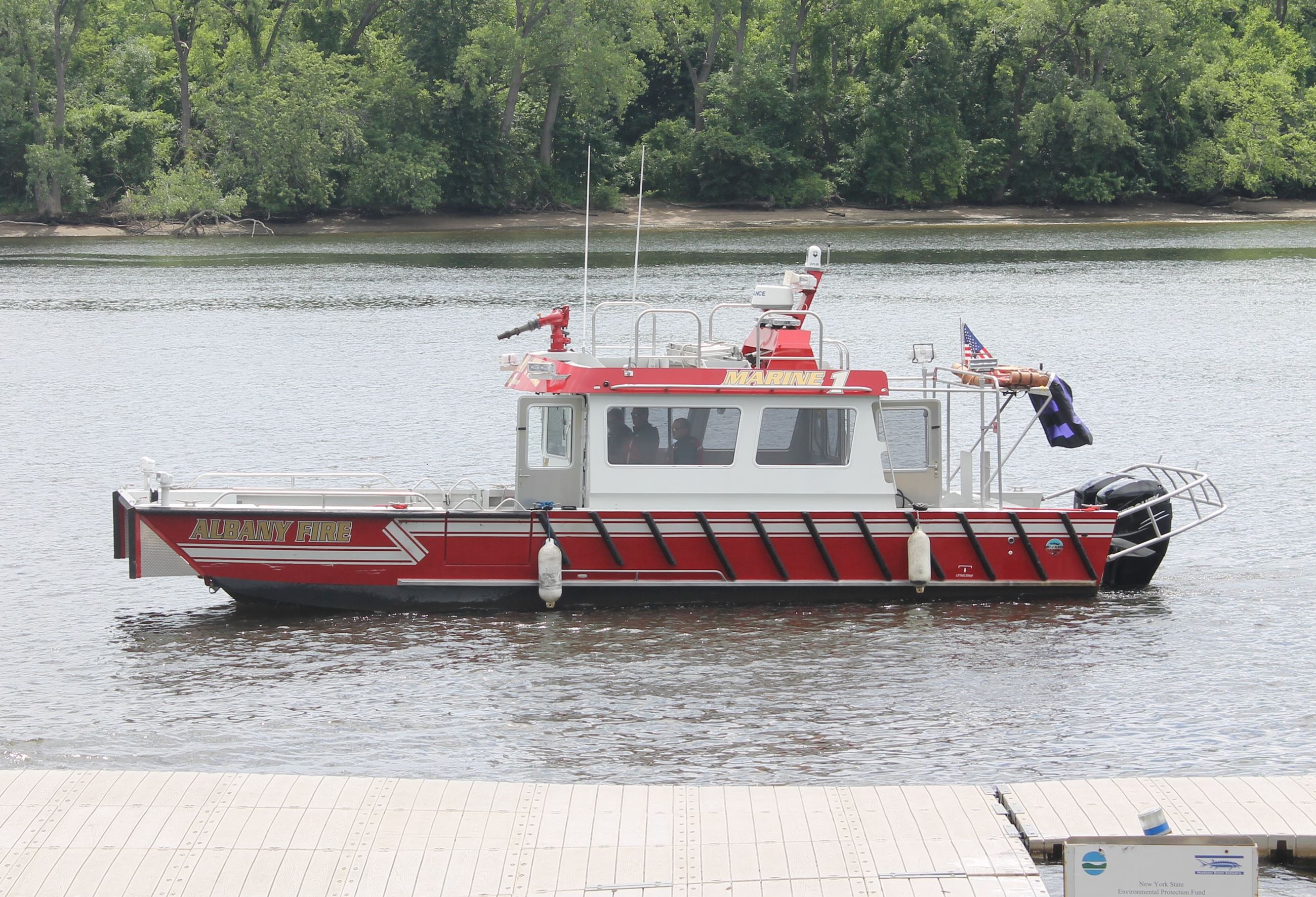 Marine 1 is a custom built heavy duty vessel manufactured by Lake Assault Boats. It is 36 feet long and 10.5 feet wide. It is propelled by two 300 horsepower outboard motors. Marine 1 is capable of day or night operations in any weather condition. It is equipped with precision GPS mapping, high resolution radar, an advanced thermal imaging camera system sonar. It has a landing craft style bow which drops down for transfer of patients or equipment.

Marine 1's on-board fire pump can flow over 1500 gallons of water per minute through a roof mounted master stream as well as hand lines.

In addition to water rescue and firefighting operations, Marine 1 can assist the Albany Port Authority and the U.S. Coast Guard with hazard mitigation operations such as deploying an absorbent boom system around a hazardous material spill.

The Albany Fire Department's Hazardous Materials Unit is equipped to investigate and mitigate any potentially harmful material release in the City of Albany and in Albany County. This unit is manned by members of the Rescue Squad with support of other fire suppression/EMS units.

The Albany Fire Department operates an attack foam/resupply trailer donated to the Department by Global Partners. The Global Oil Terminal at the Port of Albany stores up to 25 million gallons of liquid hydrocarbons.

Albany Fire Department's Foam Trailer is prepared to respond to spills and fires inside and outside the Global Terminal. The trailer is also available for disasters outside of the City of Albany.